Following a night under canvas we felt properly inducted into the realm of professional campers. Our morning routine, which was pretty much the same for the days that followed, went something like the following:

Day 2 began beautifully – we filled up our water containers at the font and limbered up to Pic Neoulous (1256m) which was the highest point of the day. What followed was a lovely descent through heathland and forest with lots of birdsong and plenty of hikers coming in our direction.The descent into Le Perthus through an old cork tree plantation with its requisite enormous manor house in a state of disrepair was a reminder of how valuable the trade was. The cork industry is somehow given a nod by Le Perthus, a border town with bizarre tax loopholes that means it sells almost nothing but alcohol and crisps. It was thriving and the kind of destination that would have served us well in other moods. We enquired in the supermarket if any fruit or vegetables were available anywhere in the town. Alas no, only 2km down the road. We settled on two fabada bean stews in cans that would be supper at some point. I have rarely been in a town that I didn’t want to leave in such haste (Ipswich aside). We left and headed towards the Roman ruins which we thought might be a resting place for the day. The temperature at this point was in the mid 30s and we stank.

The Roman ruins, to our minds, would be complete with a water source and probably a feast of some sorts. We found a little cave to rest in for 5 minutes which was very cooling. It seemed to be on some sort of lover’s lane though, so we soldiered on and climbed through Col del Priorat to Mas Nou, then to Col du Figuier. This was about 12km of track walking, where said track appeared to have been engineered to soak up the exact trajectory of the sun without providing much shade. My feet at this point had expanded a size or two and our water stops,  or “Sippettes” as we called them, were all too frequent. Thank the mountain gods for hikers crack (basically an energy bar made from solid jam) to push us through. We eventually found the village of Las Illas where there was a free camping spot next to a picnic area. It had running water, a shower, flat ground and a hotel up the road sold beer. The fabada bean stew went down an absolute treat paired with a Catalonian blonde beer. 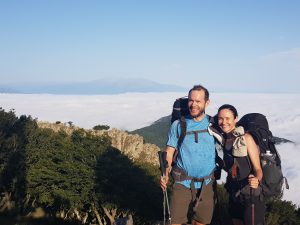 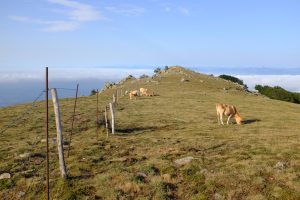 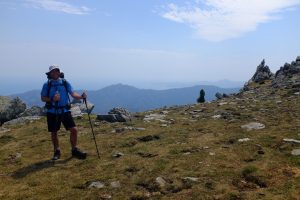